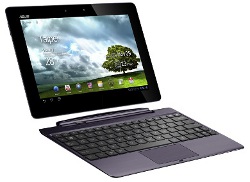 Senior Vice President of NVIDIAâs Mobile Business Unit and also the inventor of TegraÂ®, Phil Carmack, joined ASUS CEO Jerry Shen on stage. âWe are very excited to have ASUS as our launching partner. The Eee Pad Transformer Prime brings out the best of TegraÂ® 3,â said Mr. Carmack while introducing the enhanced features on NVDIAâs new quad-core processor. ASUS CEO Jerry Shen also said, "The Eee Pad Transformer Prime is designed to be the ultimate consumer choice for tablet. Aside from being extremely thin and light it is extremely powerful. We are proud to be the first to feature NVIDIAâs Tegra 3 quad-core processor and provide the best user-experience with Ice Cream Sandwichâ. The ASUS Eee Pad Transformer Prime has also been nominated as a CES 2012 Innovations Honoree.

Developed with NVIDIAÂ® and GoogleÂ®, the Eee Pad Transformer Prime and its innovative exclusive mobile dock presents a harmony of beauty and strength. In addition to having superior multimedia performance, the Transformer Prime also boasts enhanced features that include audio powered by ASUS SonicMaster technology, an 8MP rear auto-focus camera with LED flash, and an 18-hour* rated battery life when combined with the mobile dock. All of these are housed in an ultra slim 8.3mm metallic spun finish chassis that weighs just 586g.

Featuring an incredibly slim form factor, the Transformer Prime is a svelte 8.3mm thin and the only metallic tablet that weighs in at a mere 586g. It brandishes a metallic spun finish design made of aluminum for a secure yet extremely comfortable grip. It comes in two gorgeous colors: Amethyst Gray and Champagne Gold.

The Transformer Prime features the ASUS exclusive SonicMaster technology, which is renowned for crisp and acoustically accurate audio. It produces crystal clear sound with a wide sound range, increased sound fidelity, and distinct vocal enhancements not found on any other tablet in the market.

The Transformer Prime is the worldâs first tablet to feature NVIDIAâs next-generation quad-core TegraÂ® 3 processor, creating a new breed of high powered tablet devices. With the quad-core CPU and 12-core GeForceÂ® GPU, the Transformer Prime delivers the best and fastest experience for tablet-based multitasking, web browsing, as well as Full HD video playback and gaming. On its own, the Transformer Prime has a battery life of up to 12 hours*, but when combined with the mobile dock, it lasts up to an incredible 18 hours* as the dock recharges the tablet.

GoogleÂ® Androidâ ¢ 4.0 Ice Cream Sandwich brings a plethora of enhancements, and when combined with the design of the Eee Pad Transformer Prime, brings the user experience to new heights. The new camera UI offers better sharing, a new panorama mode, as well as live effects and backgrounds that can be applied in videos. Basic photo editing is now also built into the system, which allows for simple photo touchups.

With offline browsing, users can save web pages and view them later without an Internet connection, making it convenient for travelers. While on the road without access to a Wi-Fi network, users can use the new Wi-Fi Direct feature to directly transfer files between Wi-Fi enabled devices. Other enhancements include the new default Roboto font, with a typeface that is easy to read. Users can now also access the Transformer Primeâs camera directly from the lock-screen. Finally, among various other UI changes, users can easily create folders on the home screen by dragging one app on top of another.

A 1.2MP front camera allows for video conferencing while an 8MP rear camera with auto-focus and LED flash takes clear and sharp photos thanks to a large F2.4 aperture, back illuminated CMOS sensor, touch-to-focus depth of field and low light noise reduction. A first for any tablet, the 8MP camera on the Transformer Prime also has the ability to take full 1080p HD video.

The Transformer Prime is offered in both 32GB and 64GB models. It features a micro SD card slot, 3.5mm combo audio jack and micro HDMI port so sharing both whatâs inside and on screen is quick and easy. However, the feature that gives the Transformer Prime its name is the mobile dock, which gives new meaning to the term versatility. The innovative and convenient design seamlessly provides the user with a keyboard and touchpad, along with limitless expandability options via the USB port and SD card slot. The preinstalled SuperNote application is able to take, draw or record notes; while PolarisÂ® Office is great for productivity as it gives users the ability to read and edit Word, Excel and PowerPoint (MS Office 97-2007 version compatible) files. In addition, ASUS is offering 8GB of free cloud storage for life via ASUS WebStorage, so users have access to their files via the cloud no matter where they are.